Popplet is an interactive app designed for the iPad and web browser and can be used by students to capture and organise ideas. Popplet offers an exciting information and communications technology (ICT) alternative to highlighting functional “chunk of meaning” as explored in previous print-based and kinesthetic activities.

In Popplet, the teacher can write a few sentences from children’s literature loved by the class (e.g. Dr. Seuss Enterprises, 1957) into boxes that differentiate the functional elements Participants, Attributes, Processes, and Circumstances. 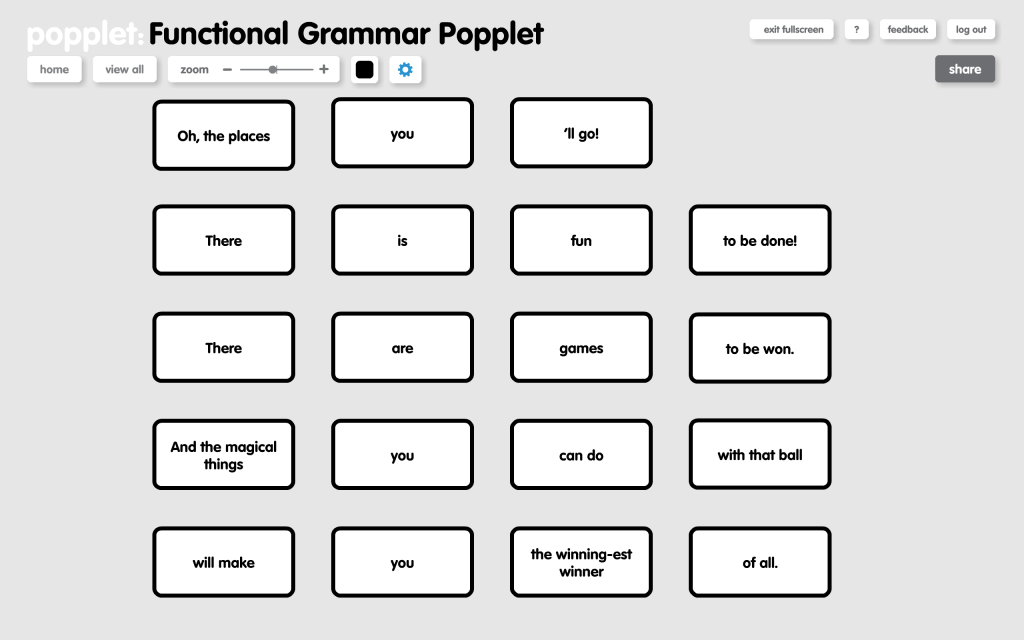 Next, the students on iPads or on the interactive white board are tasked to colour in the frames of the boxes (simple click) using the functional grammar colour key and to explain their choices. 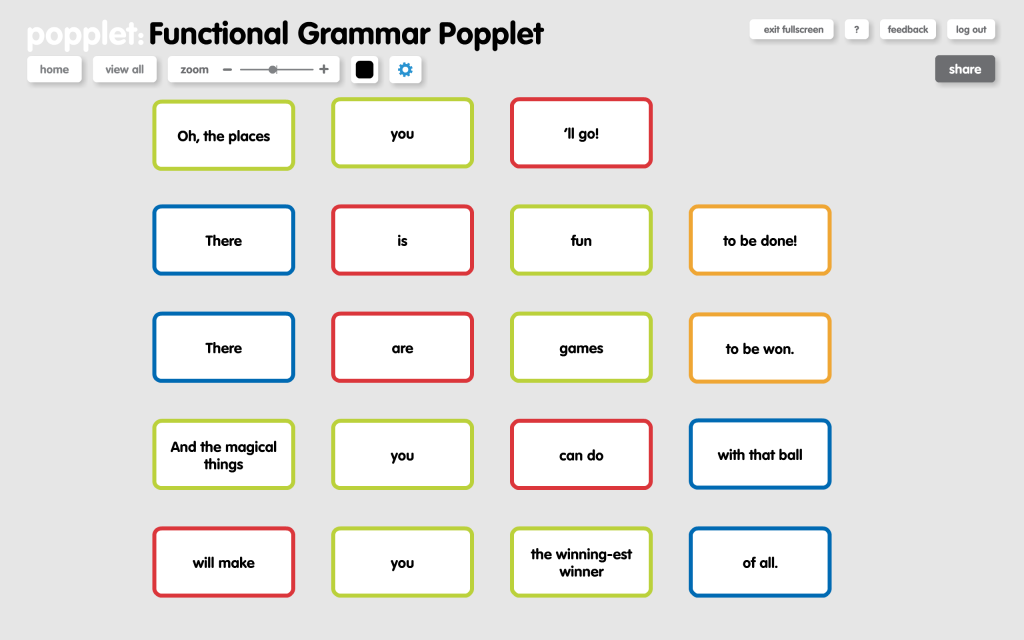 The original idea of using Popplet as an ICT approach for students to demonstrate understanding of functional grammar was developed by Krystal Laspas (2014). Krystal goes one step further by asking the students to look for “other words” that can replace those of individual boxes in linked black boxes. An alternative extension idea would be to allow students to change the original text, to ask them to make it more personal while remaining key features such as the rhymes. 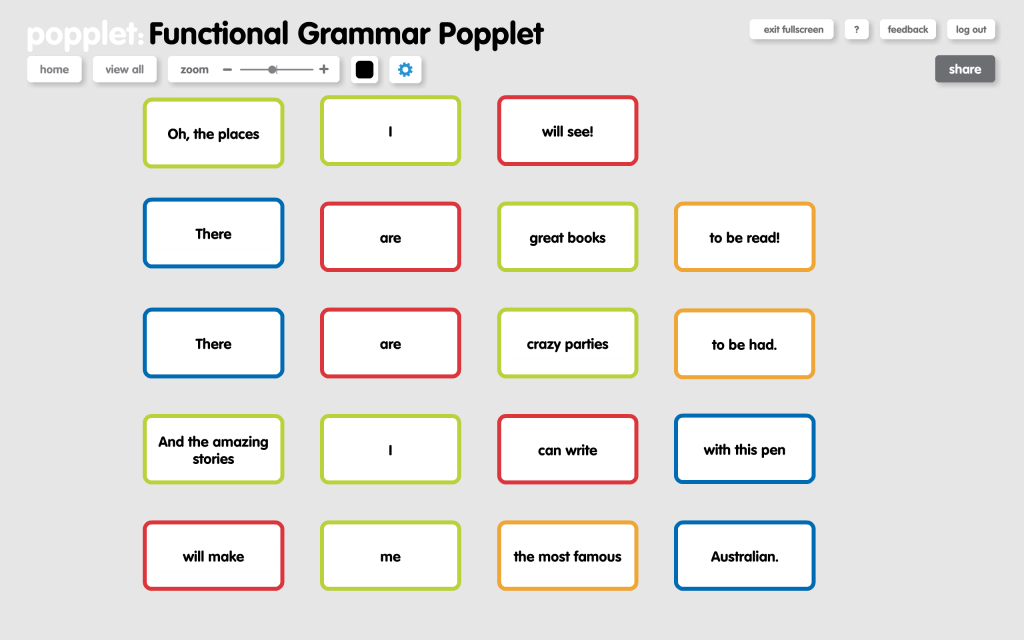 Popplet is a great format for this extension activity. The words and phrases can be changed with a single click. At the end, the students are required to review any potential functional changes in their sentences. For example, the last part of the sentence has changed from “the winning-est winner” (Participant) “of all“(Circumstances) to “the most famous” (Attribute) “Australian” (Participant).

In reference to Luke (and Freebody’s) Four Resources Model (2000), this extension activity is designed to provide literacy learners with opportunities to progress from ‘code breakers’ and ‘text participants’ (semantic competence) to become ‘text users’ (pragmatic competence) and ‘text analysts’ (coding competence). In terms of the six guiding principles for teaching reading and writing in the twenty-first century (Seely-Flint, Kitson, Lowe, & Shaw, 2014), the extension activity provides authentic opportunities for students to work with multi-modal texts and student-led inquiry by creating their own meaningful adaptations. In conclusion, the students are asked to work with functional grammar to express themselves.

Any Popplet can be shared by creating a link, by inviting collaborators. Popplets can be duplicated for groups of students to allow for simultaneous and individual work and assessment.

END_OF_DOCUMENT_TOKEN_TO_BE_REPLACED

Word People is a kinesthetic teaching and learning activity in which students act out sentence structures. The activity can be particularly popular with students who face difficulties in reading and writing. The original idea of acting out “human sentences” with colour-coded cards was developed to explore simple, compound, and complex sentence structures. 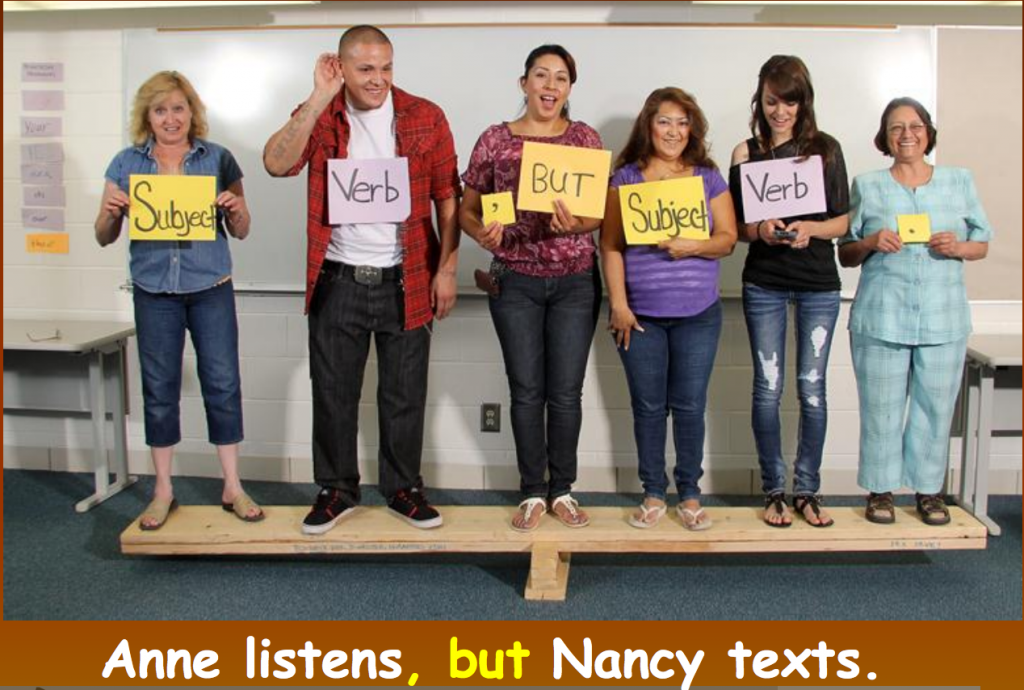 However, the activity can be easily adapted to functional elements in sentences using subject matter representations through Participants, Attributes, Processes, and Circumstances. Student groups of four could act out their “chunk of meaning”, while holding a colour-coded cards (see previous post for colour key).

This activity is particularly suitable for clauses with action processes, as illustrated by the (traditional grammar) example above. The performing students are encouraged to create their own sentences and think about action process they can easily act out. The audience is asked to guess the sentence.

END_OF_DOCUMENT_TOKEN_TO_BE_REPLACED

Students need opportunities to develop knowledge, understanding and skills of the functional and the formal nature of language. In a previous post, we explored the idea of introducing young learners to experiential functions of text through the systemic functional linguistics (SFL)  metalanguage of Processes, Participants, and Circumstances.

These “chunks of meaning” (Derewianka, 2011, p.55) correspond to traditional grammatical forms. For example, Participants (people, places, things) correspond to nouns, noun groups and pronouns. Processes (actions) correspond to verbs and verb groups. Surrounding Circumstances that detail the ‘when’, ‘where’ and ‘how’ correspond to adverbs and adverbial groups. In a more advanced functional analysis, we can further differentiate Participant from its description, introducing the functional category of Attributes. Attributes take the form of adjectives and adjectival groups.

There are a lot of possible written text-based teaching and learning activities around mapping functional meaning and grammatical forms, some of which will be explored in coming posts (1, 2). However, these require some sort of legend or key. The following key is proposed, indicating traditional (mostly word-based) grammar forms by typographical emphasis (bold, italic, underline). This requires text formatting which can be performed by the teacher in advance. The functional elements, which often involve multiple words in a row, can be highlighted by the students using colours. This approach allows student to focus on mapping functional elements of language. At the same time, they are provided with an opportunity to develop an understanding of the formal nature of language.

Key for working with functional and formal grammar

Applied to the opening sentences of ‘The secret garden’, this would look like:

The developed key is an example for the practical implementation of a continuum in approaches to describing language. As proponents of functional grammar argue, it is important not to “abandon
traditional grammar but [… to] build on it” (Derewianka & Jones, 2010, p.10).